Brazil
Is the largest and most populous country in South America, and fifth largest in the world in both area and population. Spanning a vast area between central South America and the Atlantic Ocean, it borders every South American nation except for Ecuador and Chile.

See more about the country...

See more about the state...

Rio de Janeiro City
Is the name of both a state and a city in south-eastern Brazil. Commonly known as just Rio (particularly in English and by its inhabitants), the city is famous for its spectacular natural setting, wild Carnival celebrations, samba and other music, hotel-lined tourist beaches, such as Copacabana, Ipanema, and Leblon, pavements decorated with black and cream swirl pattern mosaics, and the easy-going lifestyle of its inhabitants. 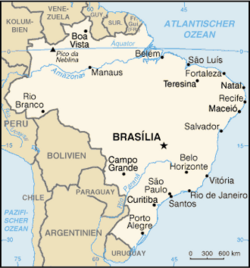